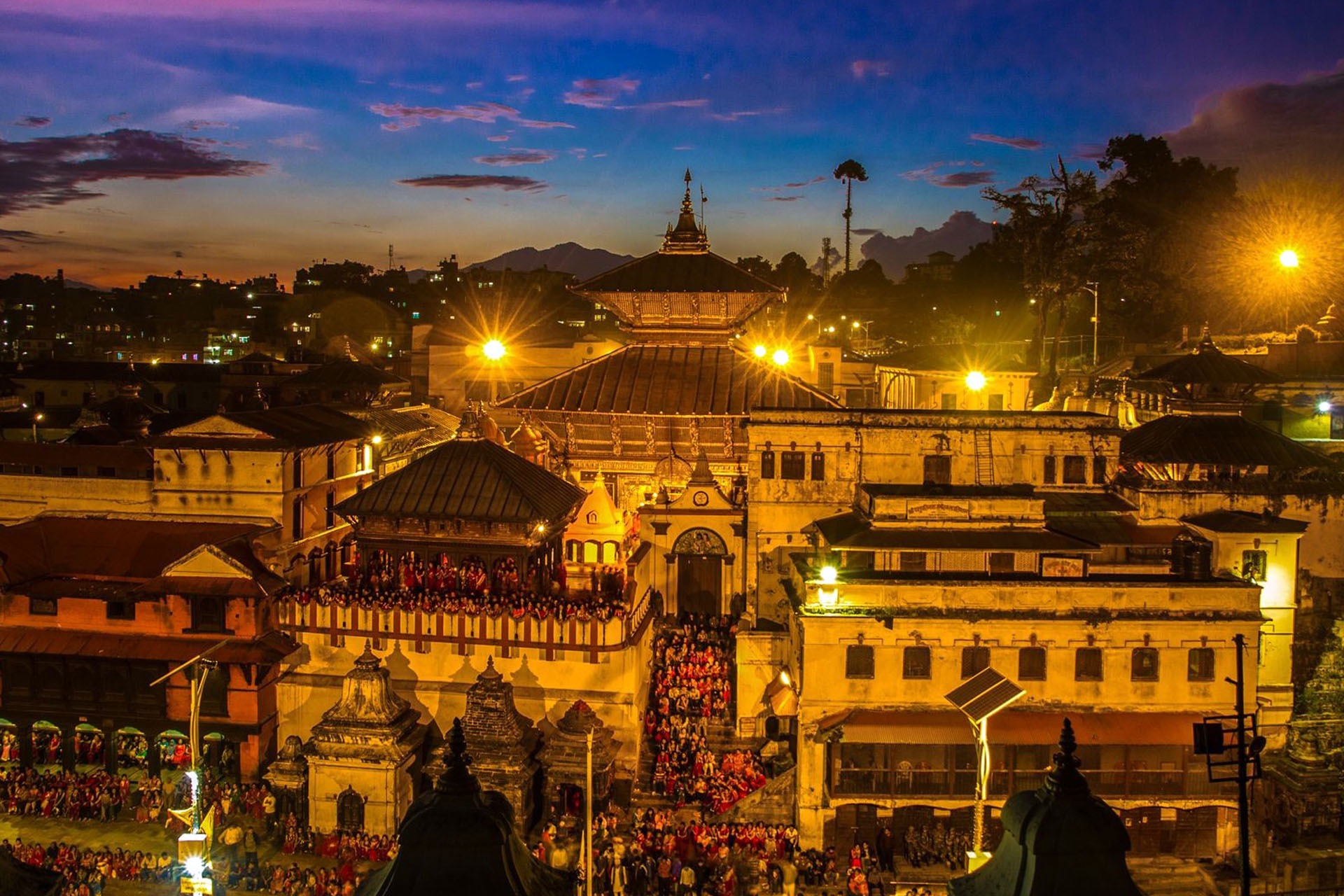 Arrive Kathmandu. On arrival assistance at the airport and transfer to hotel. Overnight stay at hotel.

The capital of the Kingdom of Nepal, Kathmandu is also known as Kantipur.Kathmandu is named after a structure in Durbar Square called the Kasthamandap- supposed to be made from the timber of a single tree. Here you will visit the Durbar Square, the ancient palace of the Nepalese Royalty. The complex has 50 temples and is distributed in two quadrangles of the Durbar Square. The outer quadrangle has the Kasthamandap, Kumari Ghar (the temple of the Living Goddess) and Shiva-Parvati Temple while the inner quadrangle has the Hanuman dhoka and the main palace.

Swayambhunath, also known as the Monkey Temple as there are holy monkeys living in parts of the temple in the north-west. Located approx. 4km/2.5 miles, Buddhist stupa this is said to be 2000 years old. The stupa consists of a dome at the base. Above the dome, there is a cubical structure present with eyes of Buddha looking in all four directions with the word “unity” in the main Nepali dialect between them. There are pentagonal Toran present above each of the four sides with statues engraved in them. Behind and above the torana there are thirteen tiers. Above all the tiers, there is a small space above which the Gajur is present.

Pashupatinath is one of the four most important religious sites in Asia for Shiva devotees. Pashupatinath, dedicated to Shiva the Destroyer, is the holiest Hindu pilgrimage destination in Nepal. Although the Pashupatinath Temple was only built in the fifth century and later renovated by Malla kings, the holy site is said to have existed from the beginning of the millennium.
A gold-plated roof, four silver doors, and wood carvings of the finest quality decorate the pagoda temple of Pashupatinath. Temples dedicated to several other Hindu and Buddhist deities surround the temple of Pashupatinath. Nearby is the temple of Guheshwori dedicated to Shiva’s consort Sati Devi. Behind the temple is the River Bagmati. On the banks of Bagmati are raised platforms used as cremation sites for Hindus. Only Hindus are allowed inside the Pashupatinath courtyard.
The temple starts swarming with devotees around 4am every morning. However the top of the hill to the east of the temple is the ideal place for the non Hindu visitor to view the temple, its rich surroundings, and below on the edge of the Bagmati river the ghats where the dead are brought to be cremated.

Boudhanath epitomizes Tibetan Buddhism. It lies 8 kms East of Kathmandu and was built by Licchavis King Man Dev in the 5th century A. D. Its colossal and ancient stupa is regarded as one of the world’s biggest stupa and has been built on a stepped octagonal base and inset with alcoves representing Buddha and his teachings. After Chinese invasion in 1959, Tibetans in thousands came to this famous Buddhist Chaitya and energized the stupa. The stupa is surrounded by various temples or ‘gompas’. The atmosphere of the whole place lightens up with zest as fragrance of incense drifts through the air. Chanting of monks and creaking of prayer wheels can be heard while strolling around the base. It is one of the prime sites for pilgrims and tourists in the country.

Patan Durbar Square another royal palace complex of the then Malla Kings during 17th century is situated in the center of Patan city. This was taken as the youngest Kingdom. The Square and its surroundings provide very good example of ancient Newari architecture. Patan City is taken as Buddhist city and can be seen many Buddhist shrines, stupas, monasteries etc.

The palace has three main courtyards the central and the oldest is Mul Chowk. To the west of the complex are a dozen free standing temples of various sizes and styles. Krishna Temple widely worshipped on Krishna’s Birthday, Bhimsen Temple, the Golden Temple of Hiranya Varna Mahavira and Sundari Chowk ( the bathing complex of the then Malla King’s ) mark the architectural excellence of its era. The Sundari Chowk with the sunken bath of Tusha Hiti, contains exquisite woodcarvings, stone, and metal sculpture. Patan Durbar Square also houses a temple of Taleju Bhawani. In this complex, there is amazing museum of art where the collection of Hinduism and Buddhism are displayed.